Brazil in political crisis: what has happened, and what might it mean for development?

IRIBA’s research has argued that in recent decades Brazil has followed a distinctive development trajectory. This has centred on inclusive growth and the use of innovative tax-financed social policy in reducing poverty and inequality and bolstering long term human development. However, current events are rather more bumpy, including a bona fide political crisis of dizzying proportions. What is going on and what might be the implications for development? I’ll take those in turn. Firstly, a not-entirely-impartial synopsis:

What is happening politically?

President Dilma Rousseff, of the centre-left Workers’ Party (PT) was impeached in a vote by Congress, and her administration supplanted by one headed by the centre-right Michel Temer (PMDB). Dilma was culpable for window-dressing government accounts to make public spending appear lower. This followed huge demonstrations mobilised under an ‘anti-corruption’ motif. So, a victory for people-power holding corrupt politicians to account, right? 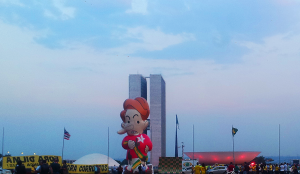 Well, it’s not quite so simple. In the Brazilian context Dilma’s infraction was both common and minor, and the grounds for impeachment debatable. There was no personal enrichment involved, and Dilma refused to strong-arm any corruption investigations, even given clear opportunities to do so and the increasingly apparent fact that her adversaries would use the investigations to catalyse her downfall.

Meanwhile, the politicians who led the impeachment drive themselves face considerably more serious and more personal corruption allegations. For instance, the chief architect of Dilma’s demise, Eduardo Cunha (PMDB) has now himself been removed for intimidation, perjury and obstructing investigations launched following the revelation of secret Swiss bank accounts containing millions in bribes. (Spending sprees in Paris and New York and a fleet of luxury cars may have been a giveaway.) New president Temer himself theoretically faces impeachable charges relating to Petrobras kickbacks. In fact, some 53% of Congress faces criminal investigations. Whether this will result in serious consequences remains to be seen; the pro-impeachment movement was inflamed and orchestrated by Brazil’s right-leaning and famously wilful media, and the predominantly white, middle class protests focussed almost entirely on Dilma and the PT and thus are now sated. Inside government, impeachment was driven by a coalition of power-brokers, rightist evangelical Christians, powerful agricultural interests, and even apologists for the military dictatorship of 1964-85.

To be clear, almost nobody in this scenario is Snow White. The PT’s reputation as a principled, programmatic party has been tainted by several corruption scandals. Equally, though, few seriously believe that righteous outrage at Dilma’s inventive accounting was much more than a pretext for cutting short her presidency for political reasons. Whatever the shortcomings of the Rousseff government – and there were plenty – this looked rather like a soft coup mounted by a plutocratic media and political class that decided it no longer had to accept the 2014 election result.

As the new administration took the reins, government policy almost immediately jumped rightwards into an austerity project, privatisation and liberalisation of the economy, and attempts to cut investment in social programmes. Public approval of Temer and his mandate-less government is low and sinking, as policy moves in a direction that was rejected in the most recent four national elections. Protests are ongoing in most cities. Several Latin American neighbours will not recognise the new regime as legitimate. In short, it’s a mess.

Secondly, then, what implications might this have for development processes?

On the face of it, anybody who likes their development in an egalitarian and pro-poor flavour should be worried. As detailed in one IRIBA research paper, the rise of centre-left coalitions has been associated with a huge expansion in social policy and anti-poverty programmes, and significant reductions in poverty and inequality.

However, much of IRIBA’s research suggests that positive changes in Brazil since the return to democracy have been of an institutional kind with the potential to outlast crises and changes of government. It points for example to the idea of a ‘new social contract’, one which values social inclusion. One strand has shown how institutional multiplicity in anti-corruption efforts has led to improved results; another how fiscal responsibility has become a core principle of contemporary Brazilian government. Perhaps we can see the episode described above as showing that Brazil’s improved anti-corruption mechanisms really have teeth. Moreover, Dilma was prosecuted under the ‘Fiscal Responsibility Law’, so at least the law really works, following years of political impunity.

This would suggest that, worrying as the current moment is, it may in retrospect appear as more of a ‘blip’, and the gains of recent decades may not be under threat yet.

A complication comes if we see the current juncture in the longer historical context of engrained inequality and concentration of wealth and power in Brazil, legacies of colonisation and slavery. These structural dynamics only really began to be eroded with the late 1980s redemocratisation process and the new constitution that emerged. The social rights enshrined there, and their practically effective institutionalisation post-‘88, were hard-won results of intrepid social movement activism and canny political deal-making. The period of increased progressive state action from 2003 consolidated these initial advances.

Now the new government is attempting to push through a constitutional amendment that would limit investment in social policy for the next 20 years. The end of PT government has presented an opportunity to the right that it is eager to take. A new law restricting corporate political donations has in fact had the effect of handing an opportunity to wealthy individuals and/or those backed by influential and cash-flush evangelical churches to gain office. There are genuine fears that, as expressed for example by a Rio favelado, “they’re stealing the little we’ve achieved”.

As if to symbolically confirm the worst, within hours of the impeachment vote against Brazil’s first female president, Temer unveiled his new cabinet, containing a significant contingent from the influential rural landowner bloc, and comprising 100% white men, in a country where 51% are women and 53% black or mixed race. Meanwhile, the Ministry of Women, Racial Equality and Human Rights was swiftly dispatched. This tallies with the conservative and media elite-driven character of the impeachment movement.

In this light, the events of 2016 appear to represent a swing in power back towards an elite that had been losing its grip. Ideas of ‘new social contracts’ may outlast governments, but perhaps are complicated by historical inequalities of power, wealth, and social status that are more durable still.

As such, to the question ‘what will this mean for (inclusive) development in Brazil?’ the instinctive answer is: who knows, but it’s probably not good. However, as IRIBA’s research shows, it’s not necessarily so simple and so bleak. This period of more conservative and economically neoliberal government will amount to a test of the institutionalisation of the progressive aspects of the constitution of ’88, and, perhaps more fundamentally, of how structurally profound the changes of the past three decades have been.

Chris Lyon is a PhD candidate at the Global Development Institute. The working title of his thesis is Exploring a relational conception of social justice: liberals, radicals, and Brazil’s ‘new social contract’. Read more by Chris.